On April 20, 2010, the Deepwater Horizon oil rig exploded in the Gulf of Mexico. It caused the worst oil spill in human history. For months trillions of gallons of oil blasted into the oceans. And where is it today...?

On April 20, 2010, the Deepwater Horizon oil rig exploded in the Gulf of Mexico. It killed 11 workers and caused the worst oil spill in  history. For months trillion sof gallons of oil blasted into the ocean. And where is it now? Like some Diesel for Dinner?

The explosion still haunts the lives of those most intimately affected, though the story has long ago faded from the front page. After burning for two days, the Deepwater Horizon sank, causing the largest offshore oil spill in American history. The spill flowed unabated for almost three months, dumping hundreds of millions of gallons of oil into the Gulf of Mexico and the Atlantic ocean, shutting down the local fishing industry, polluting the fragile ecosystem, and raising serious questions about the safety of continued deep-water offshore drilling.

Here is a movie that Shows what happened. And happens til today.

The Great Invisible is the first documentary feature to go beyond the media coverage to examine the crisis in depth through the eyes of oil executives, survivors and Gulf Coast residents who experienced it first-hand and then were left to pick up the pieces while the world moved on. Main Character Brown traveled to small towns and major cities across Alabama, Louisiana and Texas to explore the fallout of the environmental disaster. Years later, the Southern Americans still haunted by the Deepwater Horizon explosion provide first-hand accounts of their ongoing experience, long after the story has faded from the front page.

Get your own private Group Screening or read List of Theatres here: 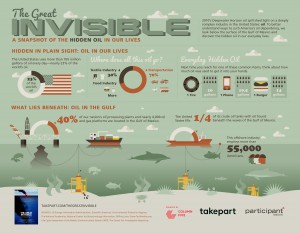