There is no way to get all the garbage out of our oceans- sais Cpt, Charles Moore, first discoverer of the great Pacific garbage Patch. Is that true?

I guess by now everyone has heared about – the 5 gyres- te start of a plastic ocean. No? Rings no bell? 5 gyres are five major garbage patches drifting in the oceans north and south of the Equator at the latitude of our great terrestrial deserts. The Great Pacific Garbage Patch, also described as the Pacific Trash Vortex, is a gyre of marine litter in the central North Pacific Ocean located roughly between 135°W to 155°W and 35°N and 42°N. The patch extends over an indeterminate area, with estimates ranging very widely depending on the degree of plastic concentration used to define the affected area.

Some months ago in 2014 he returned from a North Pacific Gyre Expedition. Although it was his 10th voyage to the area, he was utterly shocked to see the enormous increase in the quantity of plastic waste since his last trip in 2009. “Plastics of every description, from toothbrushes to tires to unidentifiable fragments too numerous to count floated past our marine research vessel Alguita for hundreds of miles without end. We even came upon a floating island bolstered by dozens of plastic buoys used in oyster aquaculture that had solid areas you could walk on,”  he sais. 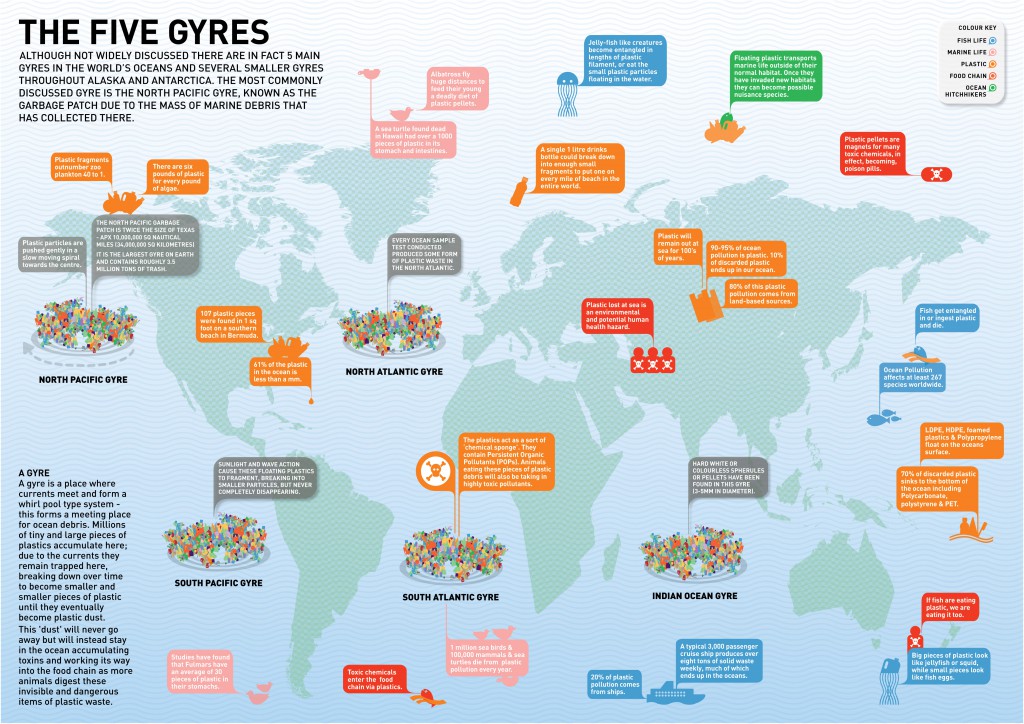 Now imagine a world where oceans are free of trash. Captain Charles Moore, the founder of Algalita Marine Research and Education, is fighting for oceans that are debris free.

His vision: “We envision a plastic-free marine environment that is healthy, sustainable and productive for all living creatures free from plastic pollution. We believe that together, we can combat the crisis through research, education, and action.”

Since his discovery, Moore has been analyzing the giant litter patch and its disastrous effects on ocean life. Through his Algalita Marine Research Foundation, he hopes to raise awareness about the problem and find ways to restrict its growth. He’s now leading several expeditions to sample plastic fragments across thousands of miles of the Pacific.

The only solution is: DO NOT USE PLASTIC!