Sailors against the Elements: The Volvo Ocean Race

Since 1973  one of the toughest offshore sailing challenges is on: The Volvo Ocean Race.

It is the contest all professional sailors dream of doing: The Volvo Ocean Race. And it is on again right now: 3 months ago 7 teams left Alicante in Spainto cross 4 oceans and 5 continents in 9 months and sail around the world.

Sailing a 20 Meter Yacht for 9 months is a brutal challenge:

8 people on a boat 24 hours a day. Tropical cyclones, icey cold weather or unbearable heat, huge waves, enerving light winds or Antarctic storms combined with the cramped conditions on board. On top: the competition factor to win the race, beaten by the elements day and night sailing with maximum speed to the most remote corners of the seas you are reaching the limits of human performance.

Listen to our our first OceanRadio Interview with Jon Bramley , Media Director of the Volvo OceanRace: 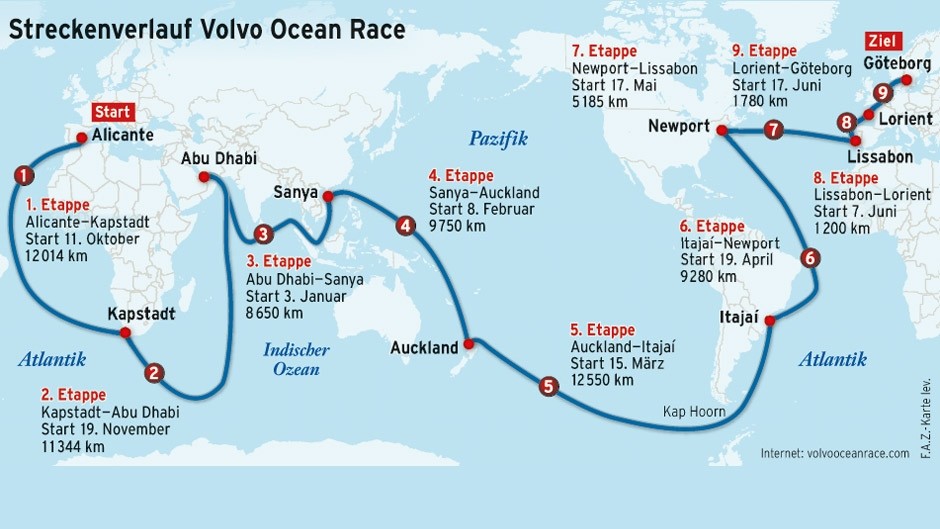 Seven teams will battle it out during the nine months of the race: Abu Dhabi Ocean Racing from the UAE, Team Alvimedica, the US/Turkish youth challenge, Team Brunel, the Dutch campaign, Dongfeng Race Team, a Chinese entry, Team SCA, the all-female team, MAPFRE and the Danish entry, Team Vestas Wind.

The race began in 1973 as the Whitbread Round the World Race and a lot has changed since the first boats left England at the start of the first edition. However, the essence of the race remains exactly the same and it is well established as one of the Big Three global sailing events along with the America’s Cup and the Olympics.

The boats have become faster, the crews more professional and the technology, particularly in terms of communications, has evolved enormously. But the beauty of the Volvo Ocean Race is that it is still a very human challenge and a battle with nature.

For weeks at a time, the sailors are forced to contend with conditions ranging from freezing cold to searing heat, while waves constantly slam the boat and an incessant noise drills its way into their ears.

All the while, they are under relentless pressure to perform at their peak and gain fractional advantages that can prove all important at the end of each leg.

The first 40 years have seen amazing victories and feats of seamanship as well as tragedy, with five sailors losing their lives at sea over the years.

copyrights of all pictures: volvooceanrace.com

← Prev: Get your Oceanfix on our Instagram Next: Say No to Super Trawlers →