Did you know that sound kills whales, dolphins and fish?

All over the world ocean lovers try to save what is left of the worlds oceans. One of most successful organisations in this fight is OceanCare.org. In 2014 one of their many activities was to prevent Petroleum companies to start exploring oil sources in the Mediterranean sea – just off the coast of Ibiza. The problem being the noise population that would arise from the use of extremely loud airguns. The noise is deadly to whales, dolphins and fish. 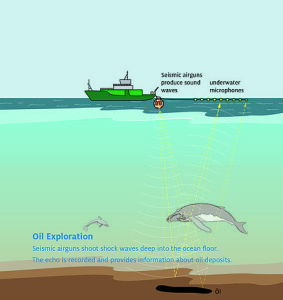 For more information go to silentoceans.org. In order to raise awareness OceanCare introduced an awesome video clip with their article in July of 2014  for their Balearic campaign.

The video clip went viral and triggered numerous media reports. Only one month later Oceancare.org in cooperation with AVAAZ presented more than 150,000 signatures calling on the government to stop oil exploration in the waters of the Balearic Islands.

In December of 2014 the first breakthrough and major setback for the oil industry finally happend, when the Spanish Ministry of the Environment preliminarily rejected the application of Cairn Energy to explore oil resources off the Balearic Islands.

But now .. without further ado: THE FAMOUS VIDEO CLIP!

So what do we learn from this?

Organisations like Oceancare.org CAN CHANGE something and deserve all the support in the world!

Click here to find out how you can support them.

OceanCare is a Swiss non-profit organisation that was founded in 1989. Sigrid Lüber became a founding member of OceanCare (formerly ASMS) after an encounter with a group of dolphines on a dive in the Maledives many years back. Since that day she has been actively working to protect marine mammals and the oceans.

Sigrid Lüber was elected President of OceanCare in 1993 and says “The world’s oceans are the basis of life on our beautiful blue planet. We must all strive for the conservation and protection of this extremely important and global habitat.”

OceanCare is committed to protecting the worlds oceans.

Since 2011 as UN special consultant – OceanCare works at national and international level in the areas of marine pollution, environmental changes, fisheries, whaling, sealing, captivity of marine mammals and public education.

← Prev: 30.000 Plastic bags per hour in Berlin: Who is Europe's biggest Ocean polluter? Next: Boyan Slat cleans Ocean up- when dreams come true →