What Vance Joy’s song is about: Riptides

You know what Vance Joy’s news Song is all about?

RIPTIDE is Vance Joy’s current Hitsingle. The 24year old australian sings about the ups and downs in life and how it can carry you out sometimes. Like a riptide. But what is a riptide actually? read here ;)!

A rip current, also referred to as a “rip”, or by the misnomer “rip tide”, is a specific kind of water current that can be found near beaches. It is a strong, localized, and rather narrow current of water. It is strongest near the surface of the water, and it moves directly away from the shore, cutting through the lines of breaking waves.

Rip currents can occur at any beach where there are breaking waves: on oceans, seas, and large lakes. The location of rip currents can be unpredictable: while some tend to reoccur always in the same place, others can appear and disappear suddenly at various locations near the beach.

A rip current forms because breaking waves push water towards the land. Water that has been pushed up near the beach flows together (as feeder currents), and this water finds a place where it can flow back out to sea. The water then flows out at a right angle to the beach in a tight current called the “neck” of the rip, where the flow is most rapid. When the water in the rip current reaches outside of the lines of breaking waves, the flow loses power, and dissipates in what is known as the “head” of the rip. Sometimes tendrils of left-over current then actually curve back towards the shore.

Rip currents can be hazardous to people who are in the water. Swimmers or floaters who are caught in a rip and who do not understand what is going on, may not have the necessary water skills, may panic, or may exhaust themselves by trying to swim directly against the flow of water.

Because of these factors, rips are the leading cause of rescues by lifeguards at beaches, and in the US rips are responsible for an average of 46 deaths from drowning each year.

Rip currents are a potential source of danger for people who are in shallow water with breaking waves in seas, oceans and lakes. Rip currents are the cause of 80% of the rescues carried out by beach lifeguards.

In a rip current, death by drowning occurs when a person has limited water skills, when they panic, or when a swimmer persists in trying to swim to shore against a strong rip current, thus eventually becoming exhausted.

So what do you do when you get caught up in a Riptide?

Rip currents are dangerous, and it’s best to learn how to identify and stay out of them. If, however, you get caught in a rip current, it’s relatively easy to escape if you know what to do.

1.     Keep your feet on the bottom as much as possible when swimming in surf conditions. Rip currents can occur in any ocean or lake where surf conditions (breaking waves) exist. Keeping your feet firmly on the lake or sea floor will help you to avoid being swept out to sea by a rip current.

3.      Call for help immediately if you can’t swim well.

4.      Swim parallel to shore to get out of the current. Being caught in a rip current is like being stuck on a treadmill that you can’t turn off. Luckily, rip currents, like treadmills, are usually pretty narrow–they’re rarely over 100 feet (30.5 m) wide–so you need only get to the side of the rip current (step off the treadmill) to escape. Rather than swim against the current toward shore, swim parallel to the shore. As you do so, the rip current will carry you further away from shore, but remember, don’t panic. 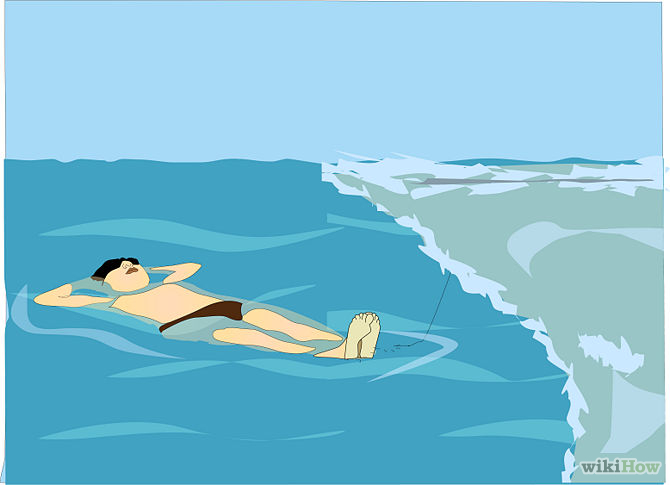 ◦    Float on your back or tread water if you can’t swim out of the current.

Continue to signal for help if there are people present.

If you’re alone, just relax and stay afloat until you have enough energy to continue to swim.

5 . Swim toward the shore once you escape the current. When you are out of the current, either because you’ve reached its side or you’ve been carried out far enough for the current to subside, make your way back to shore.

It’s generally a good idea to swim diagonally toward shore and away from the current rather than swimming straight back, as the latter method may bring you right back into the current. You may be some distance from shore at this point, so stop and float periodically if you need to rest.

← Prev: OceanRadio #4: Nike Steiger and her Solo-Sailing Dream Next: Welcome to the Plastic Age – how Pharell Williams wants to save our Oceans →